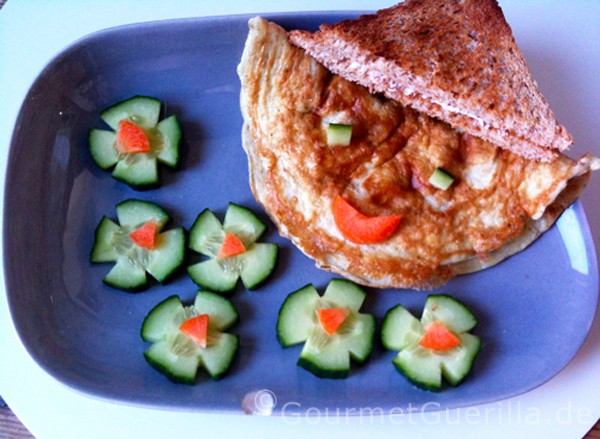 The kid just wants to eat orange marmalade for breakfast. Lush and on many toasts. As you know, with prohibitions you can achieve exactly the opposite ... here is my attempt to interest him in a less sugar and carbohydrate variant. The optical effect was quite convincing - which looks like CAN NOT just leave it to the left ...

May I introduce: Mr. egg omelette with mini toast and cucumber flowers.

Surprisingly, the whole thing simple and takes about the same time as discussions in front of the refrigerator followed by buttering:

Whip 1-2 eggs and season with salt and pepper . In a skillet heat 1 tsp oil medium and add the egg mass. While the omelet is stalling, place a piece of snake cucumber wedge-shaped on each side, creating small slits. Then slice the cucumber.
Toast Slice of whole-grain toast and divide diagonally. Spread some herb quark or cream cheese and put it into a "hat". Fold the omelette in the pan and let it solidify for a short time. Put on a plate and put a face out of some carrot and cucumber. Divide a slice carrot into quarters and put on the cucumber flowers as a splash of color. Finally, put on the toast.

I thought the flowers were so beautiful that I made some for my lunch.

If you want to buy this website, please don't hesitate to contact us via e-mail: domain (dot) sales (dot) org @ gmail (dot) com